Why does the malt price change every year?

In this series, Steve Le Poidevin explores the drivers for the yearly changes in malt prices

As maltsters, we all dread that feeling around November and December when the harvest is complete and we discover that we’re going to be reporting a price increase to our customers. Luckily, it’s not always bad news, as the price does fall some years, too. This obviously begs the question as to why this happens – we don’t just change the pricing for a bit of fun or variety, there is some method in our madness, honest!

The reason for such dramatic swings in price (sometimes over 10%) is primarily down to the barley. In this article I’ll hopefully give you an understanding of why barley costs what it does and why the price changes each year.

What is the biggest contribution to the malt cost?

The simple answer is barley. Yes, energy, water, production costs, packaging, and transport all play a role, but by far the biggest cost element is the raw material, which also happens to be the most volatile element too. If we’re discussing malt then we are almost always talking about malted barley, that glorious domesticated grass that gives you the sugar and protein required to produce alcohol through fermentation, but for the purposes of this article the same mechanism pretty much applies to the other cereal crops we use: wheat, rye, oats, maize and rice.

So back to barley, at Crisp, we only buy British barley for making British malt. Barley is either planted in the autumn (winter barley) or spring (spring barley) and a farmer must choose how much they plant in any given year. That choice is influenced by lots of things like growing crops that work with their local soil type and climate, what fits in with their farming system – for example if they have cattle, then they may grow their own feed crops – and most importantly, what give them the most profitable mix of crops to support their business and livelihood. 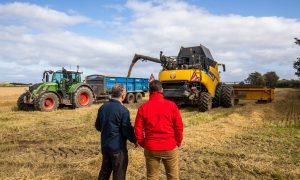 So, what determines the barley price?

Essentially it all comes down to supply and demand of both feed and malting barley. The demand bit is relatively predictable as the demand for malting barley in the UK is relatively stable. However, the supply is volatile, and it determined both locally and globally by the area planted and the yields achieved, the latter being heavily influenced by the weather. If you’d like to know more about the current outlook for the current UK crop, check out our latest report.

Why does the price of feed grain influence the malting barley price?

Malting barley is essentially a premium feed grain, so its price will never fall below feed prices – if there is no demand at all for malting barley, then it can be sold as feed barley, hence the price has a bottom stop. The feed grain price will depend on area planted and yield achieved, but it must be pointed out that this is a global market these days, so when you read of drought and fires in Australia or freak snow storms in North America, these are impacting the global supply of feed grains and hence the price. 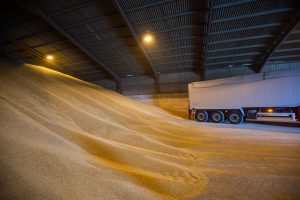 For examples, we don’t have to delve back too far: in 2018, due to the very hot weather across Northern Europe, farmers in the UK achieved an average barley yield of just 5.7 tonnes per hectare, but in 2019 it was 7 tonnes per hectare – so supply in 2019 was greater than 2018.

Even more recently, you may recall that the autumn of 2019 was a bit on the wet side (as was the winter, come to mention it!). This impacted the plantings of winter barley and wheat, the UK’s main feed crops, which were well down on both intentions and the norm, so this could well impact our pricing come harvest time.

So why do we call malting barley a premium feed grain?

To grow malting barley, you need to grow certain varieties of barley to a tight quality specification. This requires the right soil, the right levels of nutrients crop management and the right weather to achieve, which will also result in a reduction in yield compared to straight feed grains. In order to encourage the farmer to grow it, therefore, they need to be paid a premium over the feed grain pricing – remember that if the quality fails to meet the specification, it becomes feed grain, and the farmer has sacrificed yield, so will actually overall make less return than if growing a straight feed variety.

Is this level of premium fixed?

It may be in pre-contracted crops, but generally farmers will grow some malting barley on fixed premium contracts, and others on open market pricing. The latter is then open to the market supply and demand dynamics – in a good malting barley year, the premium over feed will be low, and in a poorer year, with lower availability, the premium over feed will be high. By working with the right farmers in the right areas who know how to grow great malting barley, we need to pay that premium, so this also can make barley more expensive than the rest of the market.

How does this barley price then influence the final malt price?

The first thing to remember is that barley is not malt. The barley needs to be transformed through the malting process, and this process involves losses; in fact, it takes around 1.3 tonnes of barley from the field to make 1 tonne of delivered malt. Why? The main loss is moisture – the average moisture content of barley off the field is 15-16%, while delivered malt is normally 3-4% – plus there are rootlet losses incurred in the malting process, and we sieve out the small and broken corns. Therefore a move of £30 per tonne in the barley price would equate to around a £39 per tonne move in the barley element of the malt price.

This is the basic mechanism for the majority of barley, though for special niche varieties such as Maris Otter there are different pricing mechanisms used to protect the grower, so the price changes may not be aligned with the more normal malts. The world of Maris Otter is something we will cover in a later article.

Finally, can we control the barley price?

However, by working with farmers to secure long terms growing contracts, developing a bond of trust around quality of supply and being in the envious position of having some of the best barley growing soils in the UK right on our Norfolk doorstep, we know that the barley we buy is always the best for turning into malt that produces excellent beer and whisky.

Next time I’ll look at some of the other factors which go into building up the malt price but in the meantime, if you’d like to receive a quote for our malted products then just fill out our enquiry form (https://crispmalt.com/contact-us/) telling us a bit about your brewery or distillery and where you are located. 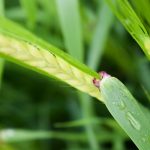